It has taken me a long time to write my story down on paper, mostly because every time I think too much about it I cry. I don’t know exactly why. I do know I still feel ashamed that I didn’t realise sooner that my baby was in so much pain. I feel angry at myself for listening to doctors instead of listening to my heart. I feel guilty for letting my poor little baby cry so much and for so long because I let people convince me she was just determined or naughty or trying to control me. I often feel as though I let my daughter down because I didn’t stand up strongly enough for her when she didn’t have a voice. I tell myself that I should 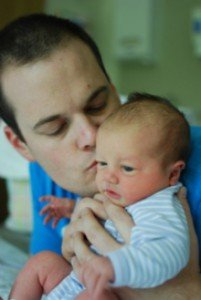 have got on top of it sooner and yet I also know that I am being somewhat unfair on myself. Reflux is an emotional roller-coaster. It plays with your mind. It makes you doubt yourself constantly. I know I’m not the only mother to have these feelings and so I have finally decided that it is time to type through the tears and tell my story…

Olivia started out like a pretty normal baby. Sure, she cried, but all babies do, right? The first few weeks were what I expected. I didn’t get a lot of sleep and

breast feeding was a nightmare with multiple bouts of mastitis, but I never thought it would be easy. These were challenges I knew would be coming and things that I knew would be short-term problems. However, when my gorgeous baby was exactly four weeks old she turned into a nightmare. I still remember the day it happened. I was going to a friend’s place for morning tea and instead of sleeping through the car trip she screamed. She wouldn’t feed, just screamed. She wouldn’t sleep, just screamed. I couldn’t seem to do anything right. She just screamed. And screamed… And screamed…. I had no idea what had happened. This wasn’t my baby! Someone had taken her in the night and replaced her with a screaming monster, I was convinced!

Over the next two weeks things went from bad to worse, until at six weeks of age she broke out in a rash. I was actually relieved. That makes sense, I thought. She has a virus of some kind, that’s why she’s been so unsettled. So off I went to the after-hours GP, certain we would get some answers. Well, we got answers alright, but not the ones we thought. The doctor told us the rash was eczema. While he was examining her, Olivia vomited all over the table. “Oh, so she has reflux does she?” said the doctor. I just stared at him blankly. Yes, she had always been a spewy baby but I didn’t think that made her a “reflux baby”. He told me she was in pain and that was why she was crying so much. He gave us a prescription for some medication to try and off we went.

Unfortunately the medication didn’t work so our regular GP gave us a different kind to try. By the time we saw our paediatrician for a routine check-up Olivia had been on meds for about a week and nothing had changed. The paediatrician advised that we would have seen a change if reflux was the issue and told us to stop all medication immediately. So we did what we were told, of course.

Over the next few weeks the screaming went from bad to worse. I was spending all day holding, rocking, walking, bouncing to no avail. I couldn’t sit down as this would upset her even more. My husband would leave for work at 6am and get home at 6pm every day. During this time I did not sit down, except to go to the toilet (with baby in my arms). I didn’t eat as I couldn’t put Olivia down long enough to make a sandwich. I did use a baby carrier but I couldn’t stop moving or bouncing as she would scream blue murder. Have you ever tried to make a meal while you’re bouncing up and down constantly? It’s easier to just not eat.

The weeks went on and my legs and back were in agony from all the bouncing and walking, I wasn’t eating, I wasn’t getting anything done and I was stressed to the max. I had been back to the doctor and the child health nurse but it was difficult to convince anyone that this wasn’t normal. She was putting on weight and slept quite well at night. Plus I wasn’t even totally convinced myself! What if I was just a bad mother? What if all this really was normal? Maybe I was just weak? I mean, who knows, I’d never done this before!

However, eventually something happened that convinced me that things just weren’t right. I was changing Olivia’s nappy and as she started crying I noticed something popping in and out of her little bottom. I couldn’t believe it – she had haemorrhoids. I took myself off to yet another doctor and convinced him to write us a referral to a paediatric gastroenterologist, despite the fact that he agreed with my paediatrician and didn’t think it was reflux, probably just a case of a little bit of colic. 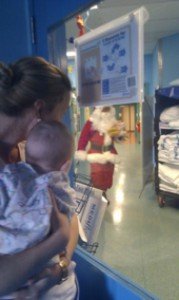 The paediatric gastro confirmed that my poor little darling had been crying for so long and so hard that the strain of it all had given her haemorrhoids at nine weeks of age. He assured me that she most definitely did have gastro-oesophageal reflux disease (GORD) and that she needed treatment quick smart. We trialled many different medications but none of them completely fixed the problem so at four and a half months of age we were booked in for a gastroscopy.

By the time Olivia had the scope her vomit was tinged pink with blood. I had stopped breast-feeding as she would scream each and every time she even took one look at my breast. She wouldn’t latch and I truly believe that if we hadn’t changed to bottle-feeding she would have needed to be tube-fed. There was just no other option. Bottle feeding allowed us to force-feed her, plain and simple. Gosh, it sounds awful just saying it now but that’s what we did. We rocked and swayed and bounced and took hours to get feeds into her, only for her to vomit it all up again.

The gastroscopy showed a “floppy oesophagus” and biopsies came back as showing inflammation in the oesophagus and stomach. Finally I had solid proof that this was not all in my head. Many things happened over the course of the next few months. I won’t go into too many details as I could go on forever. It was a long, hard road to get to the bottom of Olivia’s overall condition. Despite the test results we did not have the support of our paediatrician. She appeared critical of my decision to stop breastfeeding, seemed angry that we had seen the gastroenterologist without her knowledge and dismissed the idea of an allergy/intolerance issue. Again, we sought our own information and saw an immunologist for allergy testing and further advice. Olivia was eventually changed to a prescription formula after being diagnosed with multiple food protein intolerances by both the immunologist and the paediatric gastroenterologist and this was when we really started to see bigger improvements. We saw a nutritionist for help with dietary issues. We even saw a child psychologist for abnormal levels of separation anxiety, something that we are slowly but surely overcoming now.

Nobody really understands what it is like to have a child with severe reflux and how much it affects the rest of the family. I was unable to return to work as quickly as I would have liked. Day care didn’t work out initially as Olivia’s crying was upsetting the other children too much and we were getting so many phone calls to come and collect her that we were forced to give up. Visits to friends’ houses and other fun places were few and far between as every car trip would be dominated by constant screaming. Even having friends or family at our place was stressful as we constantly worried about the noise waking up our very light sleeper.

Those were very stressful times. However, I would like to assure anyone reading this story that the battles we go through as reflux parents are so so worth it. 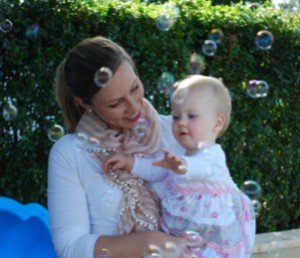 Mummy and Olivia on her first birthday

We now have the most beautiful, amazing, intelligent and gorgeous 22 month-old little girl and we are enjoying her so much. I actually think that we appreciate the everyday things she does so much more than most people do. For example, if I drop her at day care and there are no tears I often call my husband in excitement as I’m leaving the car park to share it with him. It might seem like a relatively small thing to most people but to someone who had a child stuck to my hip for over a year it is amazing.

I had tears of joy the day Olivia ate a green bean and a piece of carrot for the first time. It was only a month ago and, until then, we were still feeding her pureéd vegetables. Sure, I know everyone struggles with toddlers and their veges but food has been a huge issue for us and I was just so proud of her.

Olivia is still medicated for her reflux and we have to watch the food she eats but all-in-all she is just your average run-of-the-mill toddler. She is shy, bossy, affectionate, clever and our pride and joy. I would do it all over again a million times just to hear her say “Yo yo Mummy” which means in Livvy language “Love you Mummy”.

Editor’s note: Congratulations to the lovely Bec and her hubby on the arrival earlier this month of their latest addition, Hamish! He’s a big, gorgeous little man who we hope will be reflux-free!

Back to May ’13 Newsletter