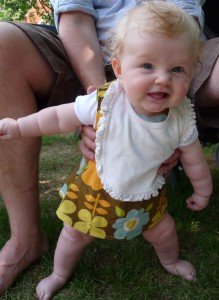 Those next twelve hours were anything but restful. It became obvious pretty quickly that Eliza was a “chucky” baby. But as she had a healthy weight gain – she weighed 8 kilos by 10 weeks – no one had any cause for concern. I don’t remember thinking anything was wrong, but when I look back on those first few months, something was. Not dreadfully wrong, but it was tough and there were a few signs that I knew something was up. I just didn’t know what was wrong or what to do about it.

Around 4 or 5 weeks, I had a mad rush to the naturopath because of her ‘colic’. The naturopath suggested an elimination diet for me (as I was breastfeeding) and a gentle herbal tea concoction to help settle baby’s belly. The diet seemed to make little difference and after two weeks the stress of sleep deprivation and having to organise a special diet was too much, so I abandoned it. The tea I kept drinking myself because bub wouldn’t. We also put the cot on a slope, kept her upright after feeds and changed the nappy changing/feeding/playing order to keep her as upright as possible at all times.

Three weeks later I had a dash to the doctor this time it was mucus-y vomit. I even took the precious specimen with me, carefully arranging it on the front seat of the car so the doctor would believe me and not think I was a crazy, highly strung new mum. Didn’t occur to me until later that taking the specimen was probably pretty good evidence that I was a crazy, highly strung new mum. That didn’t mean that I wasn’t right though! This time we got a script for zantac. I was devastated. There was something wrong with my baby. Eight weeks old and on medication. I was scared of what giving her this medication might do, rather than pleased that I had found some respite for my baby. I know this is a complete overreaction, but that is honestly how I felt at the time. It was zantac and I was devastated! Makes me laugh now. 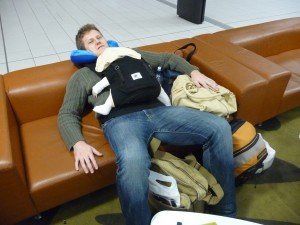 What happened next is a bit of a blur. We went to the UK to visit my in-laws. And we packed enough hand luggage to dress a small village. Due to the chuck factor of the baby, we had spares of everything for the whole family. My clothes were often vomit covered, especially my jeans for some reason, requiring several changes of clothes in any one day. The last thing I wanted on a long haul flight was getting off the plane smelling like day old baby vomit. I had also packed several sleeping bags, because I didn’t know what the temperature would be like on the plane and several options of clothes for baby and husband as well. So yeah, we were total bag people.

When we returned we moved about a bit for my husband’s work and as she learnt to sit and pull herself up, the vomiting disappeared and we assumed, as many do, that she had grown out of it. And other things emerged to explain her unsettled nights. Her ear infections were constant and a couple of times I had these strange incidents where she woke with blood her in mouth. She had no back teeth and somehow she was managing to chew the sides of her mouth until they bled. Two trips to the emergency room with my healthy baby with the mysteriously bleeding mouth and my threshold for something being ‘wrong’ was getting higher i.e. I thought this is just what happened with babies.

I had lots of explanations for the persistently unsettled nights – new baby, house move, mum goes back to work, toilet training, day care. But one day I ran out. By this time she was three and another issue was emerging – big bad uber tantrums over nothing. While it is not surprising that a chronically sleep deprived three year old has ridiculous tantrums over nothing, I just knew that this was not a normal tantrum. That combined with my near hysterical need for an uninterrupted night’s sleep that got me talking to a friend over a glass of wine one night about having absolutely no idea what to do about this situation.

As I went through the list of symptoms – grinding teeth in her sleep, crying but not awake, sour breath, protruding belly, dairy queen, won’t eat hot food everything has to be cold, wakes up crying until she eats, my friend, Jo, said to me. “She’s got reflux”. It was like someone switched a light on.

However, we still had to navigate the medical system and go on the waiting lists to get to see the doctors that we needed to see. The GP still didn’t think it was reflux. “Sleep apnoea” he said. Which was an improvement from my husband’s initial “I think my daughter has reflux” visit. Then he had responded saying she was overweight. She was 2.5. Having access to the RISA network helped me realise that GPs often had this reaction and it was worth persisting. So we did. This time I went armed with a list of symptoms from the reflux website and a determination to not leave without a referral. 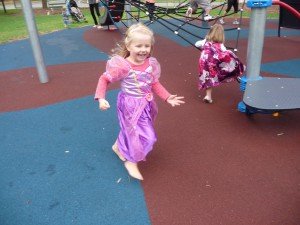 After a three month wait to see the Paediatrician, we got a feroliquid prescription and a referral to a sleep doctor for a sleep test. It ended up being the sleep doctor who agreed it was reflux and prescribed somac. Weeks later we got in to see the Paed gastro and got the works – motilium, somac, osmolax and feroliquid. Within six weeks, she lost a kilo in poo and we had a reliable good night’s sleep. That was January this year. In February Eliza turned 4.

My husband and I were fortunate in that we were always in agreement about how to raise our children. We believe in routine and self settling, especially about baby sleeping in her own bed. Over the course of having our reflux baby all this was challenged. We would have done absolutely anything and have tried most things to get a good night sleep. You don’t just have to be a reflux parent to have that experience. What surprises me most about our experience with Eliza is that we really didn’t want there to be anything wrong with her. On the scale of reflux severity and compared to some of the other stories, the superhero women of RISA and their families have experienced, our experience is really pretty mild.

Sometimes I wish so much that I had realised this sooner because I would have done things differently with her. I would go back to those first hours of life and put her in the baby carrier and never take her out! I would have sought out and embraced medication sooner. It would have saved her so much pain and discomfort and given us all more rest. I wish we had had RISA. 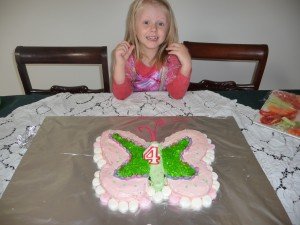 I wanted to share our story because it’s confronting, exhausting and difficult even when your reflux experience is mild or more typical. We haven’t had an endoscopy yet, but the possibility is always there. As her iron levels remain stubbornly low, I am now at the point where I want her scoped so I know what’s going on in there. This from the woman who was upset about zantac! And as we head down the path of exploration with my youngest daughter, now two and a half, whose iron levels are low and belly protruding I am so much more knowledgable and able. I feel like a better mother. The experience and support of RISA has been invaluable in helping me with this.

Back to May ’13 Newsletter