My journey to become a mum was a long one. My husband and I had been trying for a baby for over 3 years and eventually had to embark on the emotional and expensive journey of fertility treatment. After four attempts at Intrauterine Insemination (IUI) (resulting in one pregnancy, which miscarried early) we were advised to try IVF. We had high hopes of IVF working as we had fallen pregnant on our third IUI, and the fact that I got pregnant was a good sign. On the day of egg pick up 21 eggs were retrieved, only 18 were mature. We had 7 eggs fertilise, but only 3 embryos were able to be frozen. My first embryo transfer resulted in a pregnancy and we were over the moon, but hormone testing revealed the embryo was not growing and I would miscarriage soon. I was devastated. This was my second miscarriage within 4 months, and to say I was an emotional wreck was an understatement. The day of our second embryo transfer we got a phone call saying it didn’t survive the thawing process and we were left with our third and final egg. I was extremely nervous as if this implantation failed we were facing another full round of very expensive IVF and I was already emotionally spent. I kept telling myself “third embryo lucky, third pregnancy lucky”. We fell pregnant again on our third and last embryo! We were so excited, but really anxious throughout the pregnancy given our past disappointments. Every twinge of pain I feared losing the baby. Consequently, I found myself really detached during pregnancy as I was so scared of losing it. It was not until around the 35 week mark I started to relax and finally believe it was finally going to happen for us. 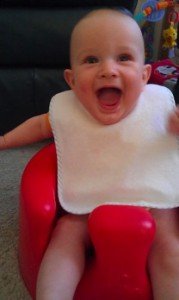 As soon as my son, Lucas, was born my heart burst with love and pride! I ended up having to have an emergency c-section after an induction attempted proved too much for our little man who was in fetal distress. I had further complications a few days later with major clotting and bleeding and was put on IV antibiotic drips, which eventually prevented me from breastfeeding properly, and as a consequence my milk just didn’t come through. The hospital was comp-feeding Lucas with formula and I was giving him whatever breast milk I could. (I later found out when I pumped at home that I was only producing 40-50mls a day at best!).

To say the first 6 weeks of parenthood were the most difficult time would be an understatement. As well as trying to deal with a newborn and becoming new parents, my mother was extremely ill in hospital, our puppy died and then the problems with Lucas started. We had just taken Lucas home from hospital and changed our first nappy at home when we noticed what looked like blood in his urine. The midwives told us it could be urates in his urine due to dehydration and to try up his feds. I had no idea at the time that my milk was not in and essentially I was starving him! No wonder he had been screaming for days. Lucas was readmitted into hospital when he was 8 days old. He had lost a lot of weight and was very listless. He was formula fed to get his birth weight up quickly. I continued to try and increase milk supply by taking herbs and motilium and pumping every 3-4 hours for almost 5 weeks in the hope my milk would come in. It just was not happening and I was exhausted, so I decided to just continue to formula feed him. I felt like I had failed the motherhood test already.

At around 4 weeks Lucas’s poo started to become mucousy and had streaks of blood through it. Doctors didn’t seem too phased by this as the poo sample came back clear of any bacteria. I was told it could be a cow’s milk protein allergy and if it continued or got worse bring him back. I was told he was thriving weight wise so it wasn’t “affecting him greatly”. I felt like I was being brushed off as a neurotic first time mum. This continued for almost 2 weeks and gradually got so bad that a couple of his nappies were pure mucus and blood! At our 6 week check up the pediatrician diagnosed him with a cow’s milk protein allergy and said he had colitis of the bowel and as a result and the bowel was inflamed. He was put on prescription formula (EleCare) and everything settled down in the poo department very quickly, but the best was yet to come.

Looking back now Lucas had shown signs of reflux from about 4 weeks old. I thought he was just vomiting more often as I had increased his formula volume as he seemed hungrier. I didn’t think much further of it and thought perhaps I was over feeding him and dropped the volume back down. I now realise this was the beginning of his reflux. Almost 2 weeks after being on the new prescription formula he started to have gagging/vomiting attacks and would vomit clear fluid that smelt like acid. Lucas was getting so distressed and would just constantly scream and want to be held all the time. He would want to feed every 3 hours – I think it soothed his throat. One night he was so bad we took him to emergency at the RBH. They said it looked like he had reflux and suggesting trying him on a low dose of Losec and make an appointment with our pediatrician to talk about it further. Lucas showed only a little bit of improvement on the medication, but not for long. We were tearing our hair out not knowing what we were doing wrong. He would cry all day and barely sleep unless upright on my belly or in the sling. We followed all the suggestions we had researched in relation to reflux, i.e. elevating the cot, keeping him upright 30 minutes after feeds etc, but nothing seemed to help. We had to wait a month to see a new pediatrician who specialised in reflux. I really thought I was spiraling into post natal depression at this point. It felt like my whole world was closing in on me and I cried every day. I missed my mum terribly and was so worried about her. I felt so isolated as I was too scared to leave the house – I was still trying to find my feet as a new mum and had no idea what I was doing or what was wrong with him, I’d heard of reflux, but thought it was just vomiting, not acid vomits and screaming etc – this was not how motherhood was suppose to be!

Our new pediatrician told us his medication dose was too low and it is a drug that is dependant on weight and age. Once this was adjusted, the first few weeks were fantastic! We could not believe the difference in him. He was sleeping for 2 hour stretches during the day and there was a light at the end of the tunnel. Unfortunately it didn’t last for long. I queried at the next check up whether his medication dose was high enough, but was told he was on the highest possible dose. I queried if he could be allergic to Elecare (my gut instinct was that this formula did not agree with him). I was told it would be very rare if he was allergic, but could try Pepti Junior. The pediatrician also prescribed Motilium in the hope to stop the vomiting. Just prior to this I had introduced solids just shy of 5 months as he was showing all the signs of being ready and wanting some food. His reflux unfortunately got a lot worse and I thought it was from the solids. My pediatrician advised me to go back to basics so we could try and work out what was causing his reflux to worsen as there were too many new factors in the equation. I stopped Pepti Junior, solids and Motilium and put him back on Elecare. Instantly he was vomiting large volumes after each feed and having gagging attacks again. This cemented in my mind that EleCare did not agree with him so my pediatrician suggested trying Pepti Junior again, but with no solid or Motilium (just Losec). 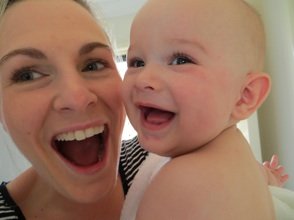 I currently have him on Pepti Junior again and he is now on Omeprazola (which I believe is a granule form of Losec and easier to give to him). We have improvement in him as he is not vomiting up as much formula as he use to after each feed. He is however still doing some bad acid vomits and having gagging/choking attacks (some days worse than others), which is so distressing. I have found he is worse in the afternoons/evenings and when he is tired. I will start him on solids again this week as he will be 6 months and I will see how he goes. Some days I still feel like we still have no control over his reflux. Just when you see improvement it flares up again. We just take each day as it comes. (To throw a further spanner in the works, my little man has cut not one, but two bottom teeth in the last week or so, which could also be contributing to his reflux being up and down).

I wish I had a happy ending to my story, but unfortunately it is still ongoing and is a lot of trial and error. Joining RISA has been a god send for me. I can’t express how grateful I am for the internet haha. To be able to talk to mums in the same boat has kept me sane. Lucas has some good days and then some really miserable days, but amazingly my gorgeous little man can still manage a beaming smile a majority of the time. It’s not how I envisaged being a first time mum would be like, but his beaming smile makes it all worthwhile. He is my light during the dark days!