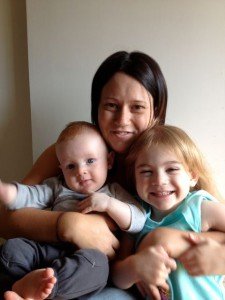 My name is Fran, and I have two children, Carmen and Flynn.

My pregnancy with Carmen was a fun one. I followed all the ‘rules’ regarding eating, chemicals and the works. I had to give up work fairly early into my pregnancy as I had incredibly bad exhaustion, fluid retention and all-day sickness. Pretty good start to that beautiful glowing pregnancy that all those books rave about. I have a bicronate uterus and she turned breech at 32 weeks: one foot under her chin and one in my pelvis, apparently a less than two percent chance of this happening!

My beautiful, much awaited daughter, Carmen, was born screaming – and didn’t stop all night. I had a big PPH after my cesarean, and was feeling very under the weather and quite dazed. A midwife even had to remind me to dress her! She was incredibly unsettled from word go. She would not cry, she just screamed. The first night was horrid; I ended up asking a midwife for help and was rather abruptly told I had to learn to deal with her. The midwife ended up taking her to the nursery and for the next 4 hours all I heard was her screaming. I remember feeling so overwhelmed. My favourite memory of the hospital stay was the lady in the bed next to me telling her friend, that all the baby next door did was scream.

Once we got home, I had the hope that it would get better. Carmen fed every two hours, cat napped, arched her back, pulled her legs up, screamed quite regularly and started throwing up more. She put on weight however, so every visit we had to the doctors they assured me it was just colic and she would grow out of it.

At 4 weeks on the dot life turned into hell. She would sleep a maximum of 2 hours in a 24 hour period, for over 2 weeks. The rest was either her feeding, projectile vomiting, screaming, being rocked in a pram or held. I ended up ringing my Mum in the middle of many nights to come and help as my husband or myself could not physically hold her anymore. I tried so many natural medicines that you can buy off the shelf in a pharmacy, a swing, a sling and nothing worked. I went to numerous doctors and all just said it was bad colic and she would be fine. Most common thing I was told was that I was just an anxious first time Mum.

At 6 weeks of age, I ended up demanding a referral to a brilliant pediatrician, of all things who saved my life as a baby with asthma and severe reflux. I had no valve to the top of my stomach and no Doctors believed my mother either until I was nearly starved to death. He was quite shocked no one diagnosed her with the symptoms she was having, and we were straightaway put into hospital with exhaustion on my half and reflux on hers. She was put onto Losec, which did nothing, and was then put onto Probitor, Motilium and Mylanta. We went through the food elimination diet which showed nothing. Once the drugs started to take effect, the screaming stopped, but she was never a ‘calm’ baby. I was always getting the comment that if she was their first baby they would never ever have any more kids!

By a few months of age, I was so emotionally and physically wrecked I developed post natal depression. She just didn’t sleep much, and always needed to be rocked to sleep either in the swing or pram. We ended up going to a local sleep school, as the mother’s home in Brisbane was totally booked out for months and months. They pretty much taught me controlled crying, and didn’t help at all, other than make me feel worse about myself.

She was put on food at 5 months to try to help the vomiting, which it did, by making the vomit more fun to clean up! She ended up staying in the jolly jumper most of her awake time, happily bouncing and chucking away!

By the time she hit 10 months of age, she started to really improve. She started sleeping over night and not vomiting as much. She was slowly weaned off her medicine and is now a very healthy 3 year old. She is super active and very bright! 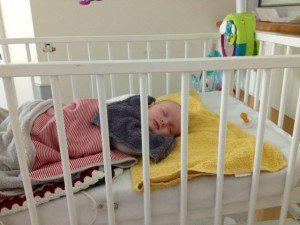 I now have a 4.5 month old boy, Flynn. His pregnancy was fun too, my body doesn’t appreciate boy hormones! I ended up very sick, needing my Mum to help me care for my daughter. I remember him constantly having the hiccups all throughout the pregnancy. We had quite a scare in the last month. He developed a heart irregularity so we were in for another caesarian. Thankfully he was born perfectly healthy, with no problems! In fact, he was such a chilled out baby, that I experienced a baby who did the newborn crawl and latched on himself in recovery! He slept, let out a little whimper when he was hungry and breastfed like a pro! All the midwives used to say they were going to take him home as he was such a good baby. I felt like I was the happiest person on the planet!

But he started showing the signs of reflux around 4 weeks of age. I mentioned this to my GP and every time she dismissed it, saying it was just colic. I was told that it was normal to be anxious with a newborn, and that her baby vomited all the time that it would be just a faze like her daughters. She kept asking me to come back and get checked for PND again.

He started refusing feeds, arching his back and screaming with every feed. He couldn’t go to sleep and ended up in the pram or baby carrier through out the day.

By 6 weeks he had gone downhill fast. Overnight he became very ill. He was extremely lethargic, in which I had to shake him to wake him up for a feed, completely white, eyes sunken and projectile vomiting quite consistently, and screaming inconsolably. I was fortunate to be able to get into my GP that day. He had lost weight since he was last weighed 10 days prior My GP didn’t believe it was reflux, and I was told I was an anxious mother since I had come prepared with a list of what was happening. I asked for a referral to a pediatrician, to which he reluctantly rang around. He was told a wait of two months; even for a highly distressed baby and mother! Thankfully Flynn had a screaming fit in his office, so he could see what I was meaning and he wrote a letter to be admitted to our local hospital’s ED. I went up straightaway and was seen by triage. After 4 hours with Flynn still screaming and numerous other people who looked ok go in before me, I asked what was going on. They re-rook his observations, and said he was fine on the charts. So I waited another 4 hours before we even got into the ED consulting rooms. The nurse and Doctor that saw us agreed it was reflux and said he needed to be admitted but we had to wait for the pediatrician to see us. Finally we got up to the ward at 11 pm that night, a total waiting time of 9 hours, all without food or drink for myself. Of course, the doctors didn’t believe me it was reflux, and only put him on a small dose of Losec after I persistently asked. He had so many tests, and an ultrasound for a blockage. We were in for 5 days and had to have a follow up with the GP. The GP told us that the doctor who saw us was his friend and rang him straightway to explain that he believed it was reflux, but no one else did, which is why it took so long to put us through the ED! He said that lovely nurse and himself pushed for us to be admitted.

With the Losec doing nothing much at all, my Mum ended up ringing the pediatrician that saw Carmen and pleading to get in to see him. By the grace of God there was a cancellation later that week and we were given an appointment for a few days time. He immediately diagnosed Flynn with severe reflux and put him on the maximum dose of Probitor. He was shocked in the treatment that we received and stated that some Doctors still believe the world is flat.

Within a week he was improving rapidly. He started to sleep, and had less periods of unsettledness and crying. He started to gain weight and get colour back to him. A month ago we had another set back with him, he started going down the same path as he did originally. We’ve now been back to the pediatrician and he’s now had another medication added to the original one. I’m just very thankful he’s only got the reflux and not any allergies or other health conditions.